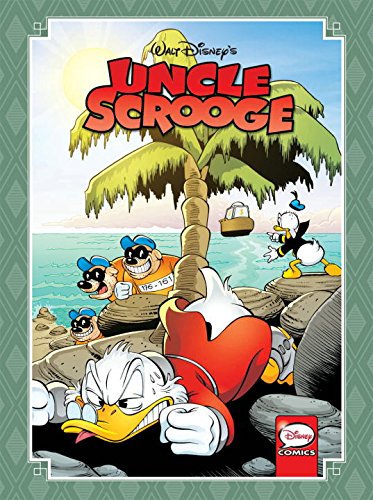 Whether he's battling a malevolent mummy or keeping one breast-stroke ahead of Earth-drowning floods, Scrooge McDuck knows that his money comes first-and he'll do anything to keep it safe, especially with the Beagle Boys, rival tycoons, and hex-happy Magica De Spell lurking about! It's IDW's Uncle Scrooge #7-12 in a special collectors' hardcover: epic Disney tales by Romano Scarpa, Giorgio Cavazzano, and more, plus bonus Scroogian extras assembled just for this book. "Burst me bagpipes!"


The classic "maestro" Romano Scarpa (1927-2005) has historically been the most popular Italian talent with American Disney comics readers. As early as his youth in Venice, Scarpa had a passion for Disney comics and cartoons, with a particular fondness for the work of Floyd Gottfredson, plotter and artist of the classic Mickey Mouse newspaper strip. In 1955, Gottfredson was forced to transform that strip--hitherto a groundbreaking adventure serial--into a gag-a-day series. In 1956, Italian editors asked Scarpa to pick up the adventure serials where Gottfredson left off, and continue the narrative for Disney's European readers. Scarpa crafted legendary Italian Mickey epics like "Kali's Nail," "The Chirikawa Necklace," and "The Delta Dimension," all of which were later reprinted in the USA to great acclaim. Apart from his Mickey work, Scarpa created two beloved thorns for Uncle Scrooge's side: brassy business-gal Brigitta MacBridge and wanna-be tycoon Jubal Pomp! After sustaining a wildly prolific career, Scarpa retired in Spain, leaving behind a grand legacy for younger Disney writers and artists, such as Giorgio Cavazzano. Giorgio Cavazzano is an Italian artist that started his career at the age of 14 inking for Romano Scarpa producing stories for Disney with the characters Micke Mouse, Donald Duck, Scrooge McDuck, and others. He is known for combining the traditional appearance of Disney characters with realistic illustration of technological gadgets and machinery.