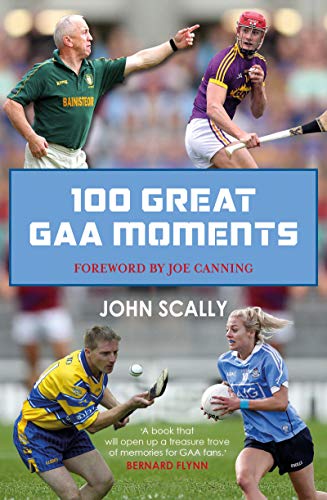 In its long and rich history, the GAA has provided many great moments. This book is a celebration of one hundred of the best of them: the Thunder and Lightning Final, the Polo Grounds Final, Séamus Darby's goal in 1982, the epic clashes between Dublin and Meath in 1991, Leitrim's Connacht title in 1994, Clare ending 81 years in the wilderness, Wexford becoming home to 'the Riverdance of Sport' and the GAA opening up Croke Park to other sports. These moments and many more are featured in these pages.

Based on exclusive interviews with the key personalities who shaped these moments, this book goes behind the scenes and offers unique eyewitness accounts of the dramas on and off the pitch that captivated, enthralled and occasionally infuriated the nation. New light is shed on old controversies, fresh insights into the players and personalities that linger long in the memory are provided, and the epic contests that turned the national games into the national soap opera are recounted by the men and women who were there in the heat of the battles.

With all 32 counties included, 100 GREAT GAA MOMENTS is a treasure trove of the incredible people and events that have made the games what they are today.

'A book that will open up a treasure trove of memories for GAA fans.' BERNARD FLYNN

'A great book that captures the real essence of the GAA. Special times and memories for everyone who was involved in our greatest GAA moments.’'
CIARÁN WHELAN